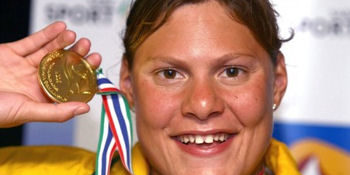 Her Majesty The Queen has announced that South African Olympic and Paralympic medal winning swimmer Natalie du Toit has been awarded an honorary MBE (Member of the Most Excellent Order of the British Empire) for her services to Paralympic sport.

On hearing the news, Natalie said:

“I find myself extremely humbled and honoured to be receiving this auspicious award. To those that have made it possible I thank you for believing in me and by having stayed by my side.

To ‘my team’ – we have faced several challenges together – each has strengthened us as a unit as well as myself as an individual. The inspiration each one of you have been to me; The values that each one of you carried out, never wavering; these have all culminated in having this specific honour being bestowed.

To everyone who believed, a huge thank you!”

“Natalie has achieved great success in her sport, demonstrating an ability to compete with the best in both Olympic and Paralympic disciplines at numerous international sporting events. Natalie is an inspiration to up and coming athletes throughout the world and I am delighted she has been recognised for her achievements”

The UK is proud to have helped shaped Natalie’s career.  Her first competition was the 2002 Commonwealth Games in Manchester.  She retired after the 2012 London Olympic and Paralympic Games after winning 3 Gold and 1 Silver medals. She has been an inspiration for a generation of paralympians and we are delighted that her contribution has been recognised.”