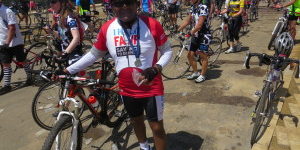 SASCOC President Gideon Sam has successfully completed yet another gruelling sporting event as part of an ongoing awareness campaign of doping in sport. On Sunday, Sam was one of thousands of cyclists who rode the Momentum 94.7 Cycle Challenge in Johannesburg.

Earlier this year, the SASCOC President completed the tough Two Oceans half-marathon road race in Cape Town. On both occasions he was competing to raise awareness of the ‘I Play Fair’ project to raise anti-doping awareness.

He completed Sunday’s undulating route in a time of under five hours, 30 minutes.

‘I must take the time to congratulate organisers of this event for a great day of sporting fun,’ said Sam.’

‘The Johannesburg people truly made it an occasion to remember. Everyone rallied behind the event and the amount of music being played along the road and groups of dancers made it extra-special.

‘It was also a special weekend for South African sport. Firstly, we need to congratulate the South African Football Association (SAFA) for some great leadership in their sport and the role they played in Bafana Bafana’s excellent win against Sudan in Durban to qualify for the African Cup of Nations tournament in Equatorial Guinea next year.

‘Also on Saturday, our rugby team bounced back to beat old rivals England at Twickenham and then the Protea cricketers bounced back to square their one-day series against Australia in Perth.’